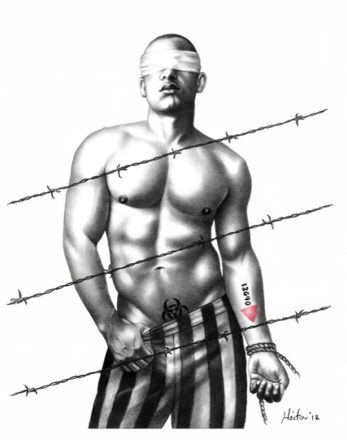 LOS ANGELES – In the drawing “Nuestras Historias Plegadas” (Our Pleated Histories), a blindfolded shirtless, muscular man stands behind barbed wire and lowers the left waistband of his prison garb, revealing a biohazard symbol.

The man’s right wrist is bound with rope and an upside down pink triangle is tattooed on his forearm.

“I wanted to bring some of our gay history back to our new generations,” Silva told Out in the 562. “I have been talking to a lot of gay youth and other gay people, including gay Latino immigrants, and I’ve noticed that they don’t know about our past and what we’ve been through to get where we are today.”

The pink triangle is the symbol Nazis used to mark gay men before they were tortured and killed in the concentration camps.

“We’re still fighting for our place and rights, but we are standing taller and stronger then ever, even though they still want to keep us tied down. Of course we still have a lot of fighting to do but we have come a long way.

“There has been some controversy about the muscle body, and how it can be seen as a denial of the death camps and the diseased bodies from AIDS. But I don’t see it as a denial as much as a refusal,” he says. “It’s a defiant body.”