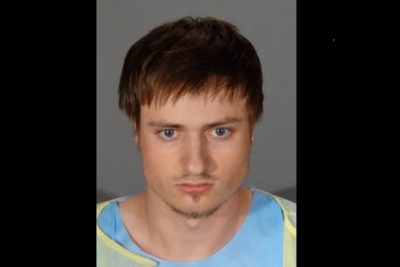 James Wesley Howell, an Indiana man who was on his way to LA Pride in West Hollywood when he was arrested last year in Santa Monica, where police seized weapons, ammunition and bomb-making materials found in his car, will be going to court. Photo: Santa Monica Police Department.

LOS ANGELES — An Indiana man who was on his way to LA Pride in West Hollywood when he was arrested last year in Santa Monica, where police seized weapons, ammunition and bomb-making materials found in his car, will be going to court.

At an evidentiary hearing Tuesday, Los Angeles Superior Court Judge Upinder Kalra said enough evidence exists to require James Wesley Howell, 20, to proceed to trial on one felony count each of possession of a destructive device on a public street, possession of an assault weapon and manufacturing or importing a high-capacity magazine, along with a misdemeanor count of possession of a loaded firearm in a vehicle, according to Los Angeles County Deputy District Attorney Sean Carney.

Howell remains jailed in lieu of $2 million bail while awaiting his March 28 arraignment at the Airport Branch Courthouse.

ARRESTED ON WAY TO LA PRIDE

Howell, who was arrested on June 12 about 5 a.m. by Santa Monica police, told police he was planning to attend the 46th annual LA Pride Parade and Festival in West Hollywood, but made no reference to wanting to harm anyone, police said.

The incident alarmed many people because it took place a few hours after a gunman, who was eventually fatally shot, killed 49 people in a mass shooting at the Orlando, Florida, gay nightclub Pulse.

But Santa Monica police officials said there was no known connection between Howell and the Pulse nightclub massacre.

The police were called after Howell was seen knocking on a resident’s door and window. When officers arrived, they saw an assault rifle on the front seat of Howell’s white Acura sedan with Indiana license plates. After searching the car, officers found three assault rifles, high-capacity magazines and ammunition along with a 5-gallon bucket with chemicals that could have been used to make an improvised explosive device, police said.

Howell also had a buck knife, a Taser, a black hood, handcuffs and a security badge in his car.

As a result of the Orlando massacre and Howell’s arrest, security was increased at the LA Pride festival.

During Howell’s arraignment June 14, the prosecutor said Howell had 20 pounds of explosive mix in his car and five gallons of gasoline. Some of the materials were already mixed in a bucket in the car, the Los Angeles Times reported.

One day after the charges were filed against him in Los Angeles, Howell was charged with sexually molesting a 12-year-old girl in his home state of Indiana, the Indianapolis Star reported last year.

According to the Star, Indiana officials believe Howell left for California after learning he was under investigation in the molestation case.

The status of the Indiana case was not immediately known.