With the historic win in Tuesday’s election, the five-member Palm Springs City Council will be completely LGBTQ — possibly the first council in the United States with 100 percent queer representation. Photo: City of Palm Springs

PALM SPRINGS – With the historic win in Tuesday’s election, the five-member Palm Springs City Council will be completely LGBTQ — possibly the first council in the United States with 100 percent queer representation.

Lisa Middleton made history as the first openly trans candidate elected to a nonjudicial office in California, according to unofficial results from the Riverside County Registrar of Voters.

Victoria Kolakowski was elected an Alameda County Superior Court judge in 2010. Kolakowski also is the first transgender judge in the U.S.

“It’s all because of all of you that we are here tonight, celebrating a victory, a historic victory for our city and for our state,” Middleton told supporters Tuesday night, according to the Desert Sun. 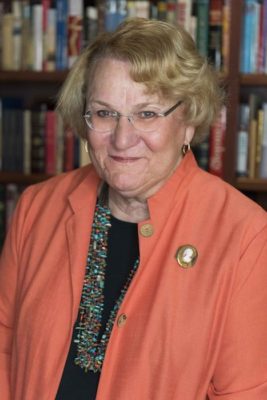 Middleton, retired from the California State Compensation Insurance Fund, is a member of the City’s Planning Commission and chairwoman of the Organized Neighborhoods of Palm Springs. She also is a member of the boards of directors of the Desert Horticulture Society and the Desert LGBTQ Center, where she was interim executive director in 2014.

On the planning commission, Middleton has advocated for downtown renewal, increased use of solar energy, and cooperation between developers and neighborhoods.

Holstege is an attorney who focuses on assisting underserved communities in the area, including people with disabilities, LGBTQ people, people who are homeless, injured workers, personal injury victims, and victims of discrimination and violence.

Equality California endorsed both candidates and spent thousands of dollars in direct contributions, independent expenditures, and member-to-member communications to help elect them, the group said in a statement.

“In light of the repeated attacks on transgender people from the federal government, Tuesday’s wins by Lisa Middleton in Palm Springs and other transgender candidates in Minneapolis and Virginia are a beacon of hope that voters have embraced values of equality and inclusion,” Equality California Executive Director Rick Zbur said in a statement.

“Lisa is paving the way for others to follow in her footsteps in California and across the nation. Her first place finish out of a field of 6 candidates demonstrates that a glass ceiling for transgender people who want to serve in elected office was not only broken, but was shattered in Palm Springs,” he said.

Tuesday’s election also was significant because it means the city has completely shed its connections to the Steve Pougnet era, the Desert Sun reported.

The former mayor is the centerpiece of a Riverside County District Attorney’s criminal complaint, alleging that he’d sold his vote — and his influence — in exchange for $375,000. He and two prominent developers have pleaded not guilty.

After votes are certified at the end of this month, Middleton and Holstege will join the three sitting councilmembers who were elected in late 2015 after promising to restore trust in the process, according to the Desert Sun.

The council is considering an ordinance that would strengthen its ethics and disclosure rules, the Desert Sun reported. Attorney Christy Holstege, who identifies as bisexual, was elected to the Palm Springs City Council Tuesday night and will become another LGBTQ voice on the council. Photo: Christy Holstege campaign.