Sister Rosetta Tharpe was a gospel-singing Black woman who astounded audiences in the 1940s and 50s with her guitar pyrotechnics and powerful soprano.

Tharpe, considered by many to be “The Godmother of Rock ‘n’ Roll,” influenced rock legends such as Johnny Cash, Jerry Lee Lewis, Keith Richards, Elvis Presley, and Little Richard.

Tharpe had a rumored romantic relationship with singer Marie Knight, among other women, and might have been bisexual or lesbian.

Tharpe’s amazing talents were recognized in April when she was posthumously inducted to the Rock & Roll Hall of Fame.

Mick Csaky’s documentary “Sister Rosetta Tharpe: The Godmother of Rock & Roll,” aired on PBS in 2013 as part of its “American Masters” series.

“Despite not being a household name today, Sister Rosetta Tharpe is one of the most influential artists of the 20th century,” the documentary said.

Sister Rosetta Tharpe’s “flamboyance, skill, and showmanship on the newly electrified guitar played a vital role in the conception of Rock & Roll as a genre of music,” the documentary said. 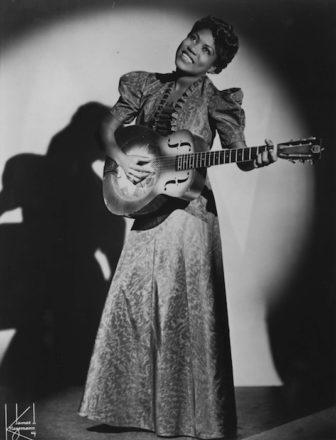 Sister Rosetta Tharpe is considered the godmother of rock ‘n’ roll. Her achievements were recognized in April when she was inducted to the Rock & Roll Hall Fame. Photo: Rock & Roll Hall of Fame.

Born in 1915 in Cotton Plant, Arkansas, Tharpe, was christened Rosetta Nubin. She picked up a guitar at 4 and then, two years later, started singing at church with her mom.

Tharpe eventually moved to Chicago and experimented with different musical styles. She married gospel with Delta blues and New Orleans jazz with her howling electric guitar to create her signature sound. That musical creation also helped her appeal to a larger audience.

Tharpe was catapulted into the music mainstream with her 1938 record “Rock Me.”

Seven years later, her 1945 track “Strange Things Happening Every Day” is acknowledged as the first gospel song to cross over to the “race” charts, which later was renamed the R&B charts. The song reached No. 2 and was a huge influence for rock ‘n’ roll.

Tharpe’s incendiary guitar playing was revolutionary and pioneering, decades before other male guitarists, according to an article in The Guardian.

“Nobody – not Chuck Berry, not Scotty Moore (Elvis Presley’s famed guitarist), not James Burton, not Keith Richards – played wilder or more primal rock ’n’ roll guitar than this woman who gave her life to God…,” The Guardian said in 2015. “With a Gibson SG in her hands, Sister Rosetta could raise the dead. And that was before she started to sing.”

Tharpe’s musical relationships also raised a few eyebrows. In 1946, Tharpe met singer Marie Knight, and after they recorded “Up Above My Head,” the two ladies teamed up and went on tour. The women worked together until 1950.


Rumors circulated for years that the women had a romantic relationship. Tharpe also had been married previously twice to men. She married a third time in 1951.

In 2007, Gayle Wald wrote a biography about the trailblazing musician, “Shout, Sister, Shout!” Tharpe died in 1973 and didn’t leave any archives or written record about her life, Wald said.

When Wald asked Knight about the rumors of an intimate relationship with Tharpe, Knight told her they were untrue.

Wald also interviewed other sources who spoke about Tharpe’s attractions to men and women, but none of them would go on the record, Wald said.

“Do I think Sister Rosetta Tharpe had attractions to and sexual relations with women? Yes,” Wald said. “But I don’t know if she used any words to identify herself.”

Wald said she wasn’t surprised that people didn’t go on the record about Tharpe’s sexuality.

“In the gospel world, it was understood that people protected each other’s privacy. You didn’t want to ruin anyone’s career or life,” Wald said. “That way, people lived their lives as openly as they could.

“Sister Rosetta Tharpe lived with a certain amount of openness,” Wald said. “It was typical for people to be out, but there was no attempt to be public or for their private life to be a part of their public identity.”

Tharpe continued to have success through the 1950s, but by the time the 1960s rolled around, she began to lose fans to a new musical revolution. Tharpe then moved to England and performed her signature music for young blues fans of London and Liverpool.

Tharpe performed less live gigs after having a stroke in 1970. Three years later, Oct. 9, 1973, on the eve of a recording session in Philadelphia, Tharpe suffered another stroke and died.

In 2007, Tharpe was inducted into the Blues Hall of Fame.

A Pennsylvania historical marker was placed at her former residence in Yorktown, a Philadelphia neighborhood. Later, January 11 was designated Sister Rosetta Tharpe Day in Pennsylvania.

Editor’s note: This article was updated with an interview with Gayle Wald, author of “Shout, Sister, Shout!”