Whether she sings in Italian, Spanish, Portuguese, or English, Laura Pausini’s mezzo-soprano voice transcends all barriers and boundaries — Her torch songs and ballads melt listeners’ hearts.

Pausini is on a 13 country world tour in support of her 13th studio CD, “Fatti sentire.” In the U.S. and Spanish markets, the CD is titled “Hazte sentir” (“Make Yourself Feel”).

Pausini’s songs also have struck a chord with the queer Latino community, who represent a large part of her fanbase.

In a recent interview with Q Voice News, Pausini, 43, who was traveling from Rome to Miami, answers questions about her lucky numbers, Laura Pausini, pictured at a recent concert in Rome, will perform at the Greek Theatre Saturday. Photo: Brainstorm Agency.

‘Fatti Sentire’ is her lucky 13

“For me number 13 is the best, a beautiful and lucky number, but the one number I’m attached to the most is 25,” Pausini says. “With this album, I’m celebrating 25 years of my career, and the audience reaction is awesome.”

‘Fatti Sentire’ has a theme

“The meaning of the title ‘Fatti Sentire’ in English is “Express yourself,” Pausini says. “There are 14 songs telling 14 stories of people who have to make a decision. The ballads deal with deeper themes, the others are easier and lighter, but always with a decision to deal with.”

“It’s always very important from the very beginning, from my first album,” Pausini says. “I’ve always talked of my own life, but in the last years I’m trying to lend my voice to other people’s stories.”

Changes during her career

“My career started when I was 18 years old, and my life obviously changed with the growth I experience year by year making new experiences,” Pausini says. “I’m a lucky person because I had the possibility to compare my background and my Italian culture with all the cultures of the countries I’ve lived in, traveling with my music. Naturally, my music has followed my growth without upsetting who I’ve always been. I can say that the more I become an adult, the more I look like the little girl I was — extroverted and curious.” 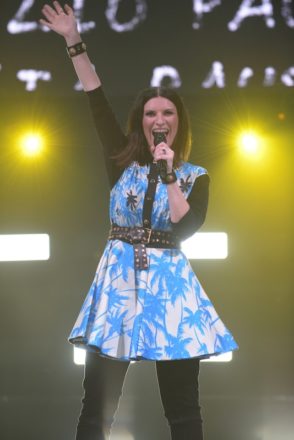 The emotions on ‘Fatti Sentire’

“It’s an album that reflects many different moods. Most of them show my own contradictions,” Pausini says. “I’m a simple and complex person, calm and turbulent, at the same time.”

Fight for who you are

“There’s a song in my album called ‘Fantastico,’ and it contains in the lyrics a concept that is so important for all the human beings: ‘Fai Quello Che Sei’ — ‘Do what you are’ regardless of any political, sexual, or religious choice,” Pausini says. “It is very important to not be afraid of yourself and fight for the things we trust in and what we are.”

It’s all about love

“When I write a song I never think about who is addressed, in the same way I never ask if someone loves a man or a woman, if is Italian or Brazilian or American. It’s not different, not relevant,” Pausini says.

“I know I have so many fans who are in love, and I don’t care about who they love. I’m happy to know that they are in love without dividing people in different categories.”

In the mood to write songs

“I write when I’m disappointed, or mad, or looking for justice, or deeply in love,” Pausini says.

Music she wants to make

“Swing, even if it’s in my Christmas album,” Pausini says. “I’ve experienced this genre, and I love it so so much.”