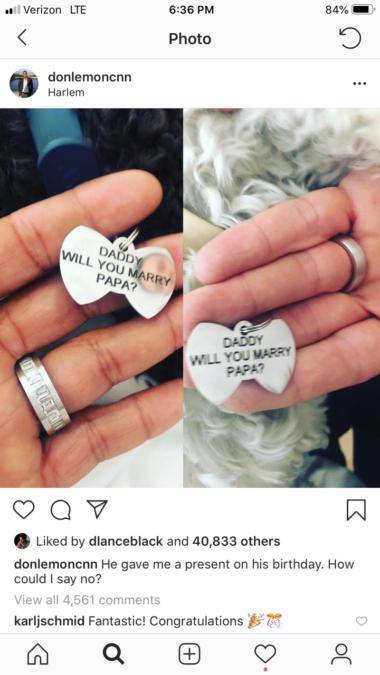 Don Lemon posted these images Saturday on his Instagram to announced he and boyfriend Tim Malone are engaged. Photo: Instagram.

“He gave me a present on his birthday. How could I say no?,” Lemon wrote in the social media post. The image showed two photos of dog tags around the necks of their pets Boomer and Barkley. They read “Daddy Will You Marry Papa?”

Lemon and Malone have been dating since 2016. They shared an on-screen kiss last year during the live broadcast of “CNN’s New Year’s Eve.” Lemon said the two met in New York City.

Lemon came out in 2011 in his book “Transparent,” where he wrote: “I think it would be great if everybody could be out. But it’s such a personal choice.” Don Lemon and his boyfriend Tim Malone shared this photo of them during a trip in the Bahamas. Photo: Instagram.

Coming out as black man

In a 2011 interview with the New York Times, Lemon talked about the difficulty African-American gay men face in coming out.

“It’s quite different for an African-American male,” he said. “It’s about the worst thing you can be in black culture. You’re taught you have to be a man. You have to be masculine.

“In the black community, they think you can pray the gay away,” said Lemon, making reference to the discredited and dangerous practice of conversion therapy, which promotes the mistaken belief that a person can change their sexuality by praying.

Coming out good for everyone

In the same interview, Lemon said it would be “great if everybody could be out.

“But it’s such a personal choice. People have to do it at their own speed. I respect that. I do have to say that the more people who come out, the better it is for everyone,” he said.

“If I had seen more people like me who are out and proud,” Lemon said, “it wouldn’t have taken me 45 years to say it, to walk in the truth.”