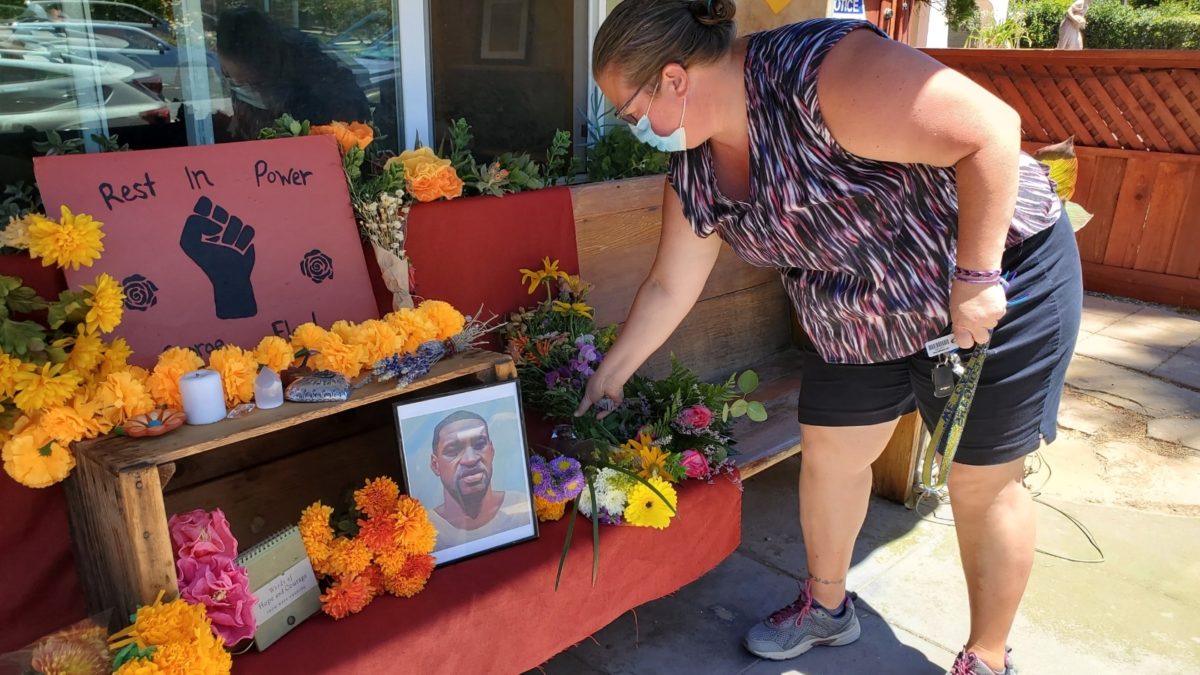 A woman lays flowers at a George Floyd memorial outside the Olive Avenue Market in Redlands. Photo: Beatriz Valenzuela for Q Voice News.

UPDATE: The All Black Lives Matter protest march will start 11 a.m. Sunday at the intersection of Hollywood Boulevard and Highland Avenue. They will march west, go south on La Brea Avenue, west at Sunset Boulevard, south on Crescent Heights Boulevard, and west on Santa Monica Boulevard. The march will end at San Vicente Boulevard in West Hollywood.

Instead, a Black Advisory Board, which was formed June 7 and includes black LGBTQ leaders, will be in charge of the All Black Lives Matter solidarity march, LA Pride said Monday on social media.

The advisory board is not working with Christopher Street West, the 501(c)3 nonprofit that produces the annual LA Pride Parade and Festival, and serves as an independent body, the statement said.

“Out of recognition and respect to the years of work and action of Black LGBTQ+ leadership and community organizers, Christopher Street West and LA Pride will no longer co-organize the All Black Lives Matter march,” LA Pride said in the social media post.

The statement also said that LA Pride and Christopher Street West “are in full support and stand unapologetically in solidarity with efforts to dismantle racial injustice, systemic oppression, institutional barriers, police brutality and discrimination of all kinds.”

Last week, Christopher Street West said it would plan a solidarity march to protest racial injustice, police brutality, and systemic. The announcement was initially well received, but then black activists said that LA Pride failed to reach out to the community about the protest

Christopher Street West also was criticized for working with the Los Angeles Police Department to secure a permit for a protest about police brutality.

The Black Advisory Board has nine members:

Due to ongoing concerns about possible transmission of COVID-19, the California Department of Public Health recommends that participants who will march should wear face coverings at all times.

LA Pride said earlier this month that this year’s festival will be a virtual event and celebration recognizing the group’s 50th anniversary.