More than 100,000 people are expected to visit the desert and attend Palm Springs Pride. The events and festivities take place from Thursday to Sunday throughout the city.

Palm Springs has celebrated Gay Pride since 1986 when it was called Sizzle, a variety show with local entertainment.

More than 30 years later, the party and fight for equality and visibility has grown to a parade, marches, and street parties.

Here’s everything you need to know about Greater Palm Springs Lesbian, Gay, Bisexual, and Transgender Pride.

What: George Zander was an LGBT activist and the victim of a hate crime when he and his husband were attacked in 2015. Six weeks later, Zander died, though an autopsy showed his death was from unrelated, natural causes.

Where: Begins at Grand Central, 160 La Plaza and will move through downtown Palm Springs 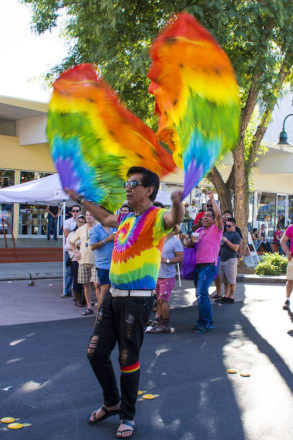 What: A traveling, national tribute to religious leaders who have lost their jobs because they are  gay. Organizers hope the project brings awareness and acceptance of LGBTQ members in religious spaces.

What: Ensemble cast performs a variety of duets, show tunes, and songs.

Where: Pearl McManus Theatre at the Palm Spring’s Women’s Club

What: An outdoor street party to honor people who work for equal rights in the LGBTQ community.

What: Proceeds will benefit the LGBT Community Center of the Desert.

Where: Starts on West Chino Drive at Belardo Road and continues through the Las Palmas neighborhood.

Where: Downtown Park, between Palm Canyon Drive and Museum Drive. Where: The Barracks Bar in Cathedral City

What: Pre-parade brunch and 25 percent of all the proceeds will be donated to Palm Springs Pride.

Where: Steps off at  Tachevah Drive and Palm Canyon Drive and travels through downtown before ending at the Pride Festival entrance at Museum Way.

What: Music, food and drinks, and a drag show and all ticket proceeds will benefit the Desert AIDS Project.