A biography on pioneering gay civil rights activist Bayard Rustin is in development at Netflix, the streaming giant announced Thursday.

George C. Wolfe (“Ma Rainey’s Black Bottom”) will direct the film, and Dustin Lance Black will write the screenplay, the statement said. Black won an Oscar in 2008 for writing “Milk,” which told the story of gay rights activists Harvey Milk.

No cast has yet been announced for “Rustin.”

A description of the films says, “Rustin” tells the story of charismatic, gay, civil rights activist Bayard Rustin,  who overcame an onslaughts of obstacles, and altered the course of American history by organizing the 1963 march on  Washington.”

Barack and Michelle Obama’s Higher Ground Productions will produce the film for Netflix.

President Obama posthumously awarded Rustin, with the Presidential Medal of Freedom in 2013. Rustin died in 1987. 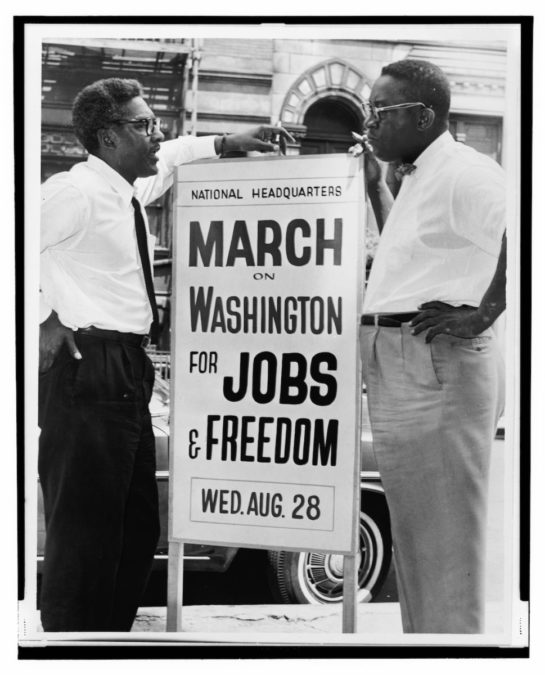 Rustin was an advisor and mentor to Martin Luther King, Jr., but often was forced to stay in the shadows by other leaders in the movement who disapproved of Rustin’s sexuality.

Rustin also worked with A. Philip Randolph, participated in the first Freedom Rides, and fought to integrate workers unions.

Later in his life, Rustin was vocal advocate for gay rights and testify on behalf of the state of New York’s Gay Rights bill.

Rustin was arrested January 21, 1953, in Pasadena, and convicted of “vagrancy” for violating a morality offense that was often used to discriminate against and criminalize LGBTQ and black communities, but has been repealed.

Rustin also was gay at a time when homosexuality was not only still classified as a mental illness, but also illegal in many parts of the nation. Members of the LGBTQ community also were persecuted under various morality codes in many states, including California.

Rustin was arrested for having consensual sex with two white men in a parked car, but the white men were not arrested. After the arrest, Rustin was convicted, served 50 days in jail, and was forced to register as a sex offender.

The Obamas’ Higher Ground set its upcoming slate of films and series in partnership with Netflix, which includes “Exit West,” “Satellite,” “Tenzing” and “The Young Wife.” The company is also behind Netflix’s “Crip Camp,” which was named to the Oscars Documentary shortlist