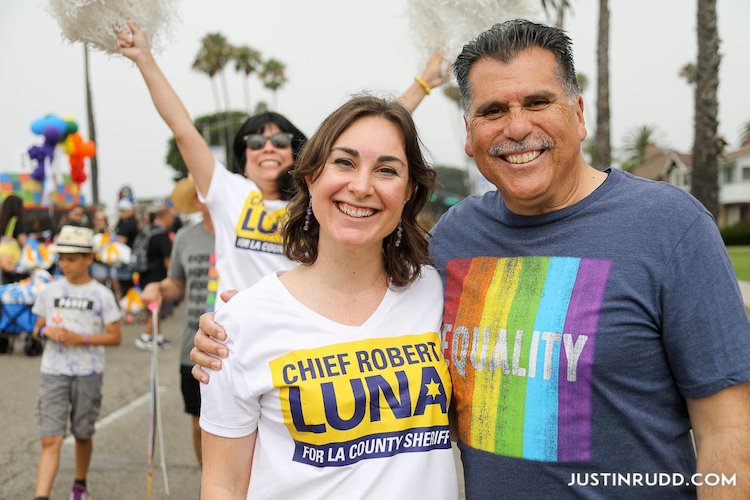 Robert Luna, right participates in the Long Beach Pride Parade on July 10. In 2016, a Long Beach judge dismissed a lewd conduct sting operation arrest and made blistering remarks against the police department for its discriminatory practices. To this day, Luna has not apologized for the department’s behavior.

Luna, the former police chief in Long Beach, said that during the next several months he will be working toward new policies and strategies to address crime, “repair relationships in our community and across the board.”

“Our service has to be effective, respectful, and constitutional,” he said.

Luna will be sworn in as sheriff on Dec. 3, but he will officially replace Villanueva on Dec. 5.

We hope Luna’s actions at the sheriff’s department are an improvement compared to his time in Long Beach.

Luna spent 36 years at the Long Beach Police Department, being appointed chief in 2014, and retiring in December 2021.

Luna inherited a department with a history of targeting gay men for false arrests that dated to 1914.

But those schemes ended in 2016, but not because the police knew they were repugnant and unconstitutional.

A judge at the Long Beach courthouse dismissed a lewd conduct case against a gay man who was arrested during a police decoy sting operation. It was a historic case because it was the first time in Long Beach court history that a judge threw out one of these problematic cases during a preliminary hearing.

It was a milestone in social justice for the gay community.

The judge’s ruling was a blistering condemnation of the police department for engaging in such discriminatory practices.

Luna; however, disagreed with the ruling, and in a 2016 interview said the sting operations were conducted after community complaints.

But in his ruling, Judge Halim Dhanidina said the police offered no evidence of complaints.

In an interview earlier this year with Q Voice News, Dhanidina said the discriminatory actions by the police department and prosecutor’s office violated the Equal Protection Clause of both the California and U.S. constitutions.

“The Moroney case is the clearest example of a case that I handled as a judge that involved how society can let a minority group down by allowing unequal treatment to occur of that community by law enforcement,” says Dhanidina, who retired from the bench earlier this year.

From 2015 to 2019, Luna and police department brass marched in the Long Beach Pride Parade, waving to the crowds that lined Ocean Boulevard and pretending that the discrimination and hostile behavior toward the gay community never happened.

During a July 2021 news conference, Q Voice News asked Luna why he had not apologized to the gay community following the judge’s ruling in the Moroney case in 2016. Luna claimed he didn’t remember the case and would have to look it up. Luna said he would followup with Q Voice News. He never contacted the publication.

On July 10, Luna appeared in the parade as a candidate for sheriff and wore a rainbow-colored shirt with the word “equality.”

Long Beach Mayor Robert Garcia, who identifies as gay, endorsed Luna for Los Angeles County Sheriff, saying he “was a great chief of police for Long Beach and he leads with integrity.”

To this day, Robert Luna has yet to apologize to the community for the police department’s repugnant behavior.