Billie Jean King says she is “bothered” that no Major League Baseball player has come out of the closet.

“It does bother me,” the tennis icon and LGBTQ activist said during an interview earlier this week. “It would help if a player who was young and popular came out. If one person came forward, it would be great.”

Part of the reason why none of the league’s baseball players publicly identify as gay, King said, is because “nobody feels safe to come out. It’s still an old boys club.”

Former Los Angeles Dodgers outfielder Glenn Burke was the first professional baseball player to come out. Burke, who also is credited with helping invent the “high five,” came out as gay in 1982 — Two years after he retired from the sport. He was 29.

King, 75, made her comments earlier this week during a telephone conference with a select group of journalists. It was the first time King, a Long Beach native, had spoken with the media since the Long Beach City Council approved naming the city’s new library after King.

“I want the Main Library to be very meaningful for the community. We want to unite people,” King said. “We are making a list of what can be meaningful and make a difference.”

The Billie Jean King Main Library is expected to open to the public September 21. The 93,000-square-foot building, approximately 30 percent smaller than the old downtown library, is projected to cost $48 million.

The library is part of the new Long Beach Civic Center, which includes City Hall, Civic Chambers (the City Council’s meeting location), the Port Administration Building, and a renovated plaza between the government buildings. The Civic Center is located along Ocean Boulevard between Magnolia and Pacific avenues.

Total cost for the Civic Center is projected to be more than half a billion dollars, approximately $533 million.

The 93,000 square foot library will be at the southwest intersection of Broadway and Pacific Avenue.

On the tennis court, King’s accomplishments are legendary. She is a former World No. 1 professional tennis player, winning 39 Grand Slam titles.

On Sept. 20, 1973, King, 29, defeated Bobby Riggs, 55, in the “Battle of the Sexes” tennis tournament. The event is regarded as one of the greatest moments in sports history.

Outside the tennis court, King was a tireless activist for equity in sports. She exhaustively supported passage of Title IX of the Civil Rights Act. 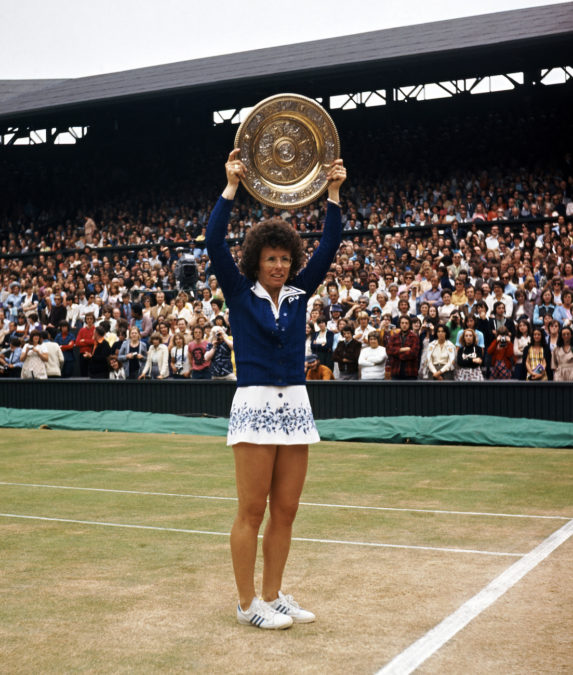 In 1971, King began an intimate relationship with her assistant, Marilyn Barnett. King acknowledged their relationship when she was outed in a palimony lawsuit Barnett filed.

At a May 1981 press conference, King, who had not yet come to terms with being a lesbian and was married to her husband, Larry King, called the relationship with Barnett  a fling and a mistake.

“When I was younger, being gay was shame based,” King said. “The media always asked the female athletes about our sexuality, but not the male athletes. That was interesting.

“If you are gay or trying to figure out your authentic self, you were so shamed,” King said. “You get measured whenever you speak. It’s not an ideal way to live life.”

After the press conference, King lost all of her endorsements, an estimated $2 million, and had to prolong her her tennis career to pay attorneys.

“When (basketball player) Jason Collins came out (in 2013), he got a call from President Obama,” King said. “I lost all of my endorsements.”

King eventually ended her marriage to Larry in 1987 after she fell in love with her doubles partner, Ilana Kloss.

Staying in the closet

In a 2007 interview with the Sunday Times, King explained why she didn’t acknowledge she was a lesbian during the 1981 press conference and the personal toll it took on her.

“I wanted to tell the truth, but my parents were homophobic and I was in the closet,” King said. “As well as that, I had people tell me that if I talked about what I was going through, it would be the end of the women’s tour. I couldn’t get a closet deep enough.”

King said one of her big goals was always to be honest with her parents, but she didn’t couldn’t for a long time.

“I tried to bring up the subject, but felt I couldn’t,” she told the Times. “My mother would say, We’re not talking about things like that, and I was pretty easily stopped because I was reluctant anyway.”

The stress and internal turmoil caused King to have an eating disorder “that came from trying to numb myself from my feelings,” she said. “I needed to surrender far sooner than I did.”

In 1995, after “lots of psychotherapy” and treatment for her eating disorder, King had the talk with her parents.

“At the age of 51, I was finally able to talk about it properly with my parents and no longer did I have to measure my words with them,” King told the Times. “That was a turning point for me as it meant I didn’t have regrets any more.”

Approximately 12 years later, the King’s name will be front and center at the Main Library. Naming a public building also is significant.

Long Beach has more than 100 buildings and facilities, but apart from Harvey Milk Park and Billie Jean King Tennis Center, near Woodrow Wilson High School and Park Estates, no other public buildings are named after people who identify as LGBTQ.