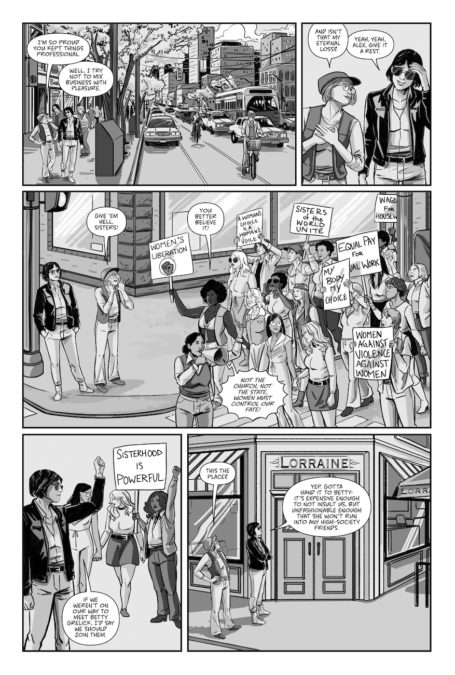 The graphic novel “Work for a Million” will introduce a generation to lesbian detective Helen Keremos, who came out readers in the 1986 mystery novel of the same name. Keremos is considered the first lesbian protagonist in an ongoing pulp fiction series. Eve Zaremba created her. Photo: Bedside Press.

Helen Keremos, a no nonsense gumshoe who isn’t afraid of getting her hands dirty when investigating a case, is considered the first lesbian protagonist in an ongoing pulp fiction series.

Keremost was first introduced to the world in the 1978 mystery novel “A Reason to Kill,” which was written by lesbian author Eve Zaremba.

Keremos’ sexuality was hinted at in that book. But she came out of the literary closet eight years later in “Work for a Million.” In that book, Karemos’ tough dyke exterior is matched only by her softness for a pretty girl in trouble.

More than 40 years later, a new generation will be introduced to the hard-boiled investigator when “Work for a Million” is turned into a graphic novel and scheduled for release May 2020.

In an interview with Q Voice News, Zaremba, 88, and her wife, Ottie Lockey, talk about their decades-long love affair, creating Helen Keremos, and how Margaret Atwood (the award winning Canadian author of “The Handmaid’s Tale”) helped them bring “Work For a Million” to a new generation. “Eve was and is a writer, and when her first book, ‘Reason to Kill,’ came out in 1978 – her dyke detective Helen Keremos was created — and I was smitten,” Lockey says. “ We’ve been together over 40 years, and once it was legal, we were married at Toronto’s City Hall” (in 2003).

“I’m a fan of mystery-detective genre. At the time (during the 1970s), there were no lesbian detectives. So I created one — Helen Keremos,” Zaremba says.

“When did I come out?  That’s a meaningless question,” Zaremba says. “Is that phrase still being used? Not by me. Let’s just say that by 1970 I was a dyke.”

“After an introduction from our friend Atwood to Hope Nicholson at Bedside Press, Eve and I began working with Hope to produce a graphic novel adaptation of Eve’s mystery ‘Work for a Million’,” Lockey says. “We are both thrilled that author Amanda Deibert and illustrator Selena Goulding are adapting the novel, and can’t wait for its publication early next year.”