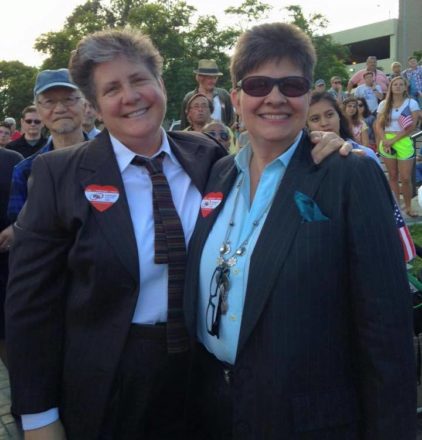 Reba Birmingham, left, will be inducted to the Harvey Milk Park’s Equality Plaza Memorial Wall during a public ceremony Thursday. Her wife, Stephanie Loftin, right, was inducted to the memorial wall in 2016. Photo: Q Voice News

The six people will be added to Equality Plaza Memorial Wall during a public ceremony at the park on Thursday at 11 a.m.

The park has been under construction for several weeks as it’s transformed into an “outdoor office,” retail space, and gathering space.

Harvey Milk Park, which opened in 2013 in downtown at Third Street and The Promenade, honors and recognizes leaders in the local LGBTQ people who have used their time, talents, and passion to help advance the LGBTQ community in the same spirit as Milk.

Along with plaques commemorating these leaders and activists, the plaza includes a concrete replica of the soapbox Milk stood on and spoke from to inspire crowds, and a 20-foot flagpole flying the LGBTQ pride flag.

Here are this year’s inductees:

Reba Birmingham, an attorney and long-time LGBTQ activist. Birmingham is married to Loftin, who was added to the wall in 2016.

Jewels, local drag queen royalty has been a staunch advocate for HIV prevention and treatment, the Long Beach AIDS Food Store, and the CARE Program at St. Mary Medical Center

John Newell, president and board chair of the AIDS Food Store

Mina Kay Meyer and Sharon Raphael, a powerhouse couple who were together 45 years, they were fierce lesbian activists who also advocated for gay and lesbian seniors. Meyer died in 2016. She was 74.

Black History Month: For James Baldwin, his queerness and blackness were intersectional
LGBTQ activists to be honored Wednesday at L.A. City Hall
LA Pride: Here's what you need to know about street closures, parking, public transportation